One of the most unique running series in the country celebrated its 20th year in equally unique fashion.

Around 50 runners who have participated in the Route 20 Road Challenge over its 20 year existence took part in a relay covering the entire distance of the Route 20 Scenic Byway from Duanesburg to Lafayette on Saturday, August 17, 2019.

“We first heard of this at a planning meeting for the (Road Challenge) banquet, said Kevin Hoehn from Rome, NY, the Road Challenge’s unofficial ambassador. “Bill comes up with some great ideas and really carries them through. It’s amazing.”

Bill Kosina is co-director of the Route 20 Road Challenge running series. The series ties together small community runs all along the Route 20 Scenic Byway corridor. Running a certain number of them earns participants great incentives ranging from gift cards to running gear. Stewart’s Shop’s is a major sponsor.

The running series began in 1999, shortly after the formation of the Route 20 Association of New York State. The running series created by then-Association President Bill Kwasniewski and Chairmen Craig North and Co-Chairman Kosina. This year’s Road Challenge includes 24 running events.

On Saturday, the Byway was split up into some 35 sections or ‘legs’, most covering distances of three to four miles though one group calling themselves “the rockin’ chicks”, in training for a marathon ran 20 miles. Several of the 50-some runners ran more than one leg.

Runners began around dawn from each end of the Byway and met at West Winfield with North and Kosina running the final leg to Cleaver’s Banquet Hall where a reception capped off Saturday’s event. Even with the traffic in Bouckville this past weekend didn’t slow down the runners who finished well under the event’s allotted time in around 10 hours.

“It was fun,” said Hunter Ough, who at 10 years of age was Saturday’s youngest participant. She ran with brother Rocco, 14, and their dad, Richard Ough. “It was fun. You see all these people at the races. Today we got to talk to so many of them,” Richard added.

It’s like we’re a big family,” added Hoehn. “ A lot of us have become friends on Facebook. A Route 20 family.”

As for Saturday’s event, Jennifer Caloia of Morrisville said “It was exciting to work up to it. Bill and Craig did a great job.”

“Everybody seemed to have a good time,” said Kosina as the event wrapped up. “We were ready for just about anything. Thank goodness it went as smooth as you could ask. We saw a lot of enthusiasm. We saw a lot of smiles.”

Participants line up at Clancy’s Banquet Hall in West Winfield. 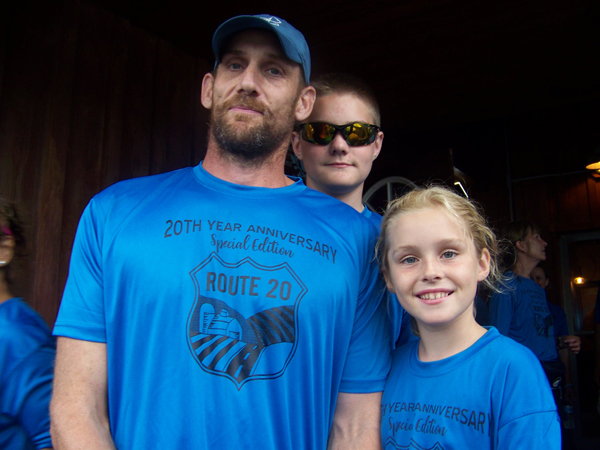 Richard, Rocco, and Hunter Ough. At  age 10, Hunter was the event’s youngest participant.

Runners greet the “the rockin’ chicks” who completed a 20-mile leg of the relay.

Bill Kosina checks maps showing where each runner will complete a leg of the 100-mile-plus relay.